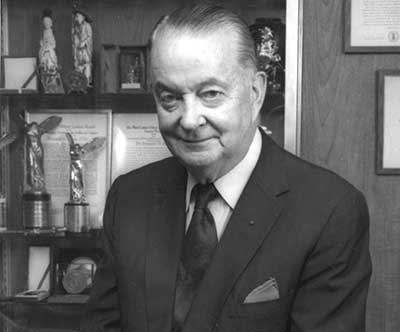 You could argue that Dr. Howard A. Rusk, a Brookfield native and perhaps one of the more overlooked innovators along Missouri Highway 36, actually was among the first to acknowledge the region’s strong historic connections. It was in his 1972 autobiography that he wrote his hometown was “halfway between the worlds of Mark Twain and Jesse James.” He surely couldn’t have imagined that, 43 years later, he’d be sharing print space with those well-known figures in a travelogue.

Known as the father of rehabilitative medicine, Rusk’s work was guided by his desire to help injured and disabled people – who often were overlooked by the medical community – to lead full lives, regardless of physical limitations. Rusk believed that a person did not “need physical wholeness to be the best at a particular occupation, whether it be lawyer, doctor, elevator operator, teacher, researcher, potato peeler or even President of the United States.”

During his career, Rusk helped thousands of individuals achieve a better quality of life through his approach to rehabilitation and his work to change attitudes within the medical community toward working with the physically disabled.

As a result, amputees, paraplegics, stroke victims, and others afflicted by physical challenges found hope in rehabilitative medicine.

Rusk lived his life by the motto with which he ended his aforementioned autobiography: “To believe in rehabilitation is to believe in humanity.”