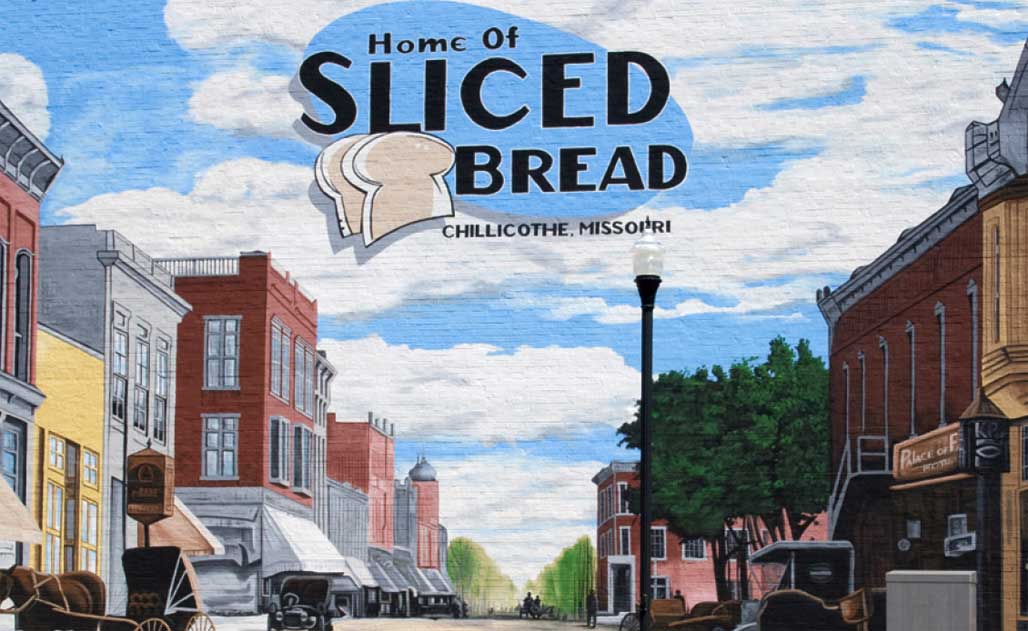 Fill in the blank: Smart phones are the greatest invention since __________________.  You said “sliced bread” right? Of course you did. Sliced bread is the innovation against which all inventions since have been compared.

That much, you know. What you may not know is sliced bread first was served in Chillicothe.

In the summer of 1928, a bakery in Chillicothe was on the verge of bankruptcy. Desperate to save the store, owner Frank Bench reached out to Iowa inventor Otto Rohwedder, who had developed a bread-slicing machine.

On July 7, 1928, Bench’s Chillicothe Baking Company put the first loaves of sliced bread on the shelves of area grocery stores. The rest is baking history.

Today, a tour of Chillicothe includes a collection of beautiful murals, one of which celebrates the city’s status as “The Home of Sliced Bread,” and a stop at the Grand River Museum, where the famous bread slicer is on display.

Sliced bread was first produced by the Chillicothe Baking Company. The same inventors also developed a rack on which to display the bread and a twist tie closure. One of the first bread slicing machines is currently on display at The Grand River Historical Society Museum in Chillicothe. Plans for permanent exhibits at the Grand River Historic Society Museum are in the works.

Local grocery stores who were among the first to stock sliced bread on their shelves, reported an amazing increase in bread sales immediately. Housewives loved the convenience of pre-sliced bread.

And the rest, as they say, is the history of the greatest thing – sliced bread.